Play About The Charter Streams In Time For Election Day 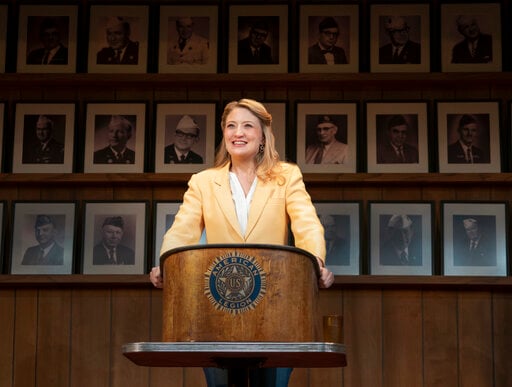 This image released by Amazon Studios shows Heidi Schreck in a scene from “What the Conststution Means to Me,” which draws on Schrecks experiences as a high-school debate champ and the lives of her female relatives to explore Americas principles and the struggle women and minorities have faced to be heard and protected by its founding document. In the work, Schreck calls the Constitution a living, warm-blooded, steamy document, but one in which womens bodies were left out from the beginning. It streams on Amazon on Friday. (Joan Marcus/Amazon via AP)

Most playwrights want their works to remain relevant for decades to come. Not Heidi Schreck, not with What the Constitution Means to Me.

NEW YORK: Most playwrights want their works to remain relevant for decades to come. Not Heidi Schreck, not with What the Constitution Means to Me.

I often say that I cant wait until the play is obsolete. Im always like a little shocked by how it continues to be relevant,” she says. “I would love for it to be a relic.”

What the Constitution Means to Me draws on Schrecks own experiences as a high-school debate champ and the lives of her female relatives to explore America’s principles and the struggle women and minorities have faced to be heard and protected by its founding document.

In the work, Schreck focuses on the Ninth and Fourteenth Amendments and calls the Constitution a living, warm-blooded, steamy document, but one in which women’s bodies were left out “from the beginning. Schreck even uses a snippet of a Ruth Bader Ginsburg address.

The play ends with the audience deciding whether to keep the imperfect but alterable Constitution or to rip it up and start over. Most audiences have voted to stick with it, a decision Schreck endorses.

I think we need the Constitution more than ever right now. Im deeply grateful it exists. And I think were going to need to rely upon it,” she says.

“However, performing the show over these past many years has made me feel that the project of reimagining some fundamental things about our country is a crucial one. And I think were seeing that happen right now.

The play premiered off-Broadway and went on to a five-month Broadway run in 2019. It was a Pulitzer Prize finalist and was nominated for two Tony Awards, including best play. Schreck estimates she’s performed it over 200 times. This month, it’s landing on Amazon Prime Video.

Filmed over two performances and a rehearsal during the last week of the show’s Broadway run, the streaming version represents the biggest potential audience for her work and Schreck at her most emotionally wide open.

Each time it moves to a bigger stage, I would feel more vulnerable about telling those stories,” she says. “I do remember both of those times feeling maybe more emotional than on another eight show week.

It arrives less than a month before Election Day, at a time when Americans are reexamining the nation’s racist and sexist past and during a fight over an empty seat on the Supreme Court.

Its interesting just to have this show now kind of interacting with this moment. Im curious what it will mean to people right now, she says. I started this piece over a decade ago so it feels like a really exciting and conclusive final chapter.

Marielle Heller, who directed the film A Beautiful Day in the Neighborhood and helms Schrecks show, says it’s important that it comes out before the election.

I do think it’s raising questions that we all need to be thinking about as we are voting for the state of our democracy right now, Heller says. Questioning the history of our Constitution and what has gone into the different laws, particularly as they pertain to women and non-binary people, our bodies it’s very poignant.

Schrecks other plays include Grand Concourse, Creature and There Are No More Big Secrets. In addition to being a stage actor for almost 20 years, she also wrote for TV, including I Love Dick, Billions and Nurse Jackie.

She grew up in Wenatchee, Washington, without ready access to theaters and remembers watching PBS broadcasts of plays growing up, as well as listening to an LP recording of The Glass Menagerie starring Jessica Tandy.

Even though I know that the theater is probably always best if you get to experience it live, I actually know the power of a recorded theater, she says.

Schreck has her hands full these days in more ways than one. She is mom to twin 5-month old baby girls. They are fueling her passion to challenge the status quo, especially at the Supreme Court.

Were just facing such a scary moment right now when it when it looks like hard-won rights rights that people died to achieve are very likely going to be rolled back by this court, she says.

When I grasp for hope, I guess I find it in the knowledge that actually the majority of the people in this country support those rights support gay marriage, support a womans right to choose, think that police violence against Black Americans is a real problem.

She has faced nasty barbs from people who have called her names and questioned her qualifications to discuss the Constitution. They have attacked her intellect and her looks. She will not bend.

It hurts me a little bit. And then I think, Well, thats exactly the reason I have to keep doing this’ just proving the need for me just to keep speaking, she says.

Mark Kennedy is at http://twitter.com/KennedyTwits