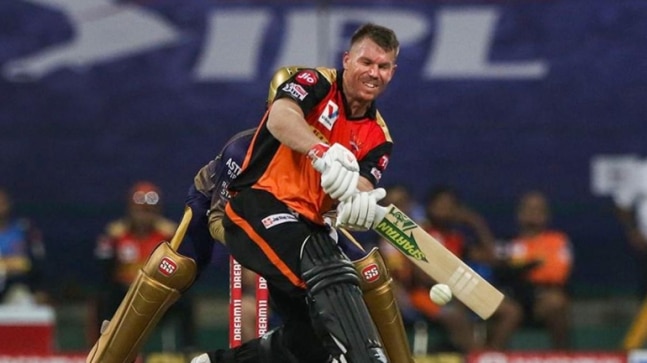 IPL 2020: David Warner was critical of Sunrisers Hyderabad’s batting approach, saying they can’t afford to play as many dot balls as they did during their loss to Kolkata Knight Riders in Abu Dhabi.

Sunrisers Hyderabad captain David Warner said he was not impressed with their extra cautious batting approach during their 7-wicket defeat to Kolkata Knight Riders in their Indian Premier League (IPL) 2020 match on Saturday. SRH posted only 142 in their quota of 20 overs despite being only 4 down at the end of the innings.

David Warner won the toss and opted to bat and they were jolted early when KKR pacer Pat Cummins removed Jonny Bairstow for 5 as early as the 4th over. Warner had a 35-run stand with Manish Pandey and just when they were looking to shift gears, the SRH captain was dismissed by young mystery spinner Varun Chakravarathy in the 10th over.

Manish Pandey hit a 38-ball 51 but the batters around him, including Warner and Wriddhiman Saha, took time to get going. Saha walked in at No. 4 and managed 30 from 31 balls while Mohammad Nabi hit an 8-ball 11 after walking in when there were only 14 balls left in the innings.

Warner was critical of SRH’s middle-overs approach but said he takes full responsibility for throwing his wicket away at an important juncture in the innings. It was SRH’s second straight defeat of the season as they are the only team to have not gotten off the mark at IPL 2020, yet.

“Unfortunately, towards the middle, we could have gone a little bit harder, taken a few more risks. It’s a very soft and poor dismissal from myself just when we’re looking to press the button and start getting on. So I don’t blame anyone, I take full responsibility for not batting out the overs and getting a soft dismissal,” Warner told the press after SRH’s defeat.

“We just can’t have 2 batsmen on the bench when batting 20 overs. We could have gone a little bit harder. Through the middle period. After I got out, we played out 4-5 overs for about 20 runs. We have to apply more pressure to the bowlers and hit more boundaries in the middle period.

“At the end of the day, I am more disappointed with the dot balls we played. I think there were 35-36 dot balls. I don’t think it’s acceptable in T20 cricket.”

Warner’s men take on Delhi Capitals on Tuesday in Abu Dhabi and it will be another stern test as they come up against an unbeaten side at the top of their game. Warner called for change in mindset before they gear up for their 3rd match of IPL 2020 at the same venue.

“I think we need to change our mindset before we play here again. The boundaries are a tad bigger than what they are in India. We have to work out where we are going to get our boundaries,” Warner said.

MUMBAI: As hearing in a plea against probe into an alleged TRP scam was deferred on Wednesday to December 2, state counsel
Read more
English

<!-- -->Police have filed a case and formed teams to investigate, the district collector saidBhopal: A shelter home in Madhya Pradesh is under...
Read more
Marathi

MUMBAI: As hearing in a plea against probe into an alleged TRP scam was deferred on Wednesday to December 2, state counsel
Read more
English

<!-- -->Police have filed a case and formed teams to investigate, the district collector saidBhopal: A shelter home in Madhya Pradesh is under...
Read more
Marathi

It has been a little over a month since Apple launched its latest iPhone lineup and in this holiday quarter, the...
Read more
Malayalam