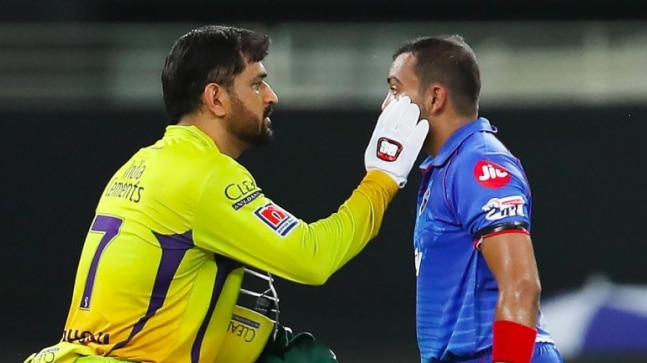 CSK vs DC, IPL 2020: Prithvi Shaw smashed 64 off 43 balls to help Delhi Capitals post 175 for 3 on the board after Chennai Super Kings put them into bat in Dubai.

Spirit of cricket was on full display in Dubai on Friday when MS Dhoni helped out Prithvi Shaw with an eye issue which the latter faced during Delhi Capitals’ innings in Dubai.

Shaw was struggling with his eyesight possibly due to dirt in his eye. He took Dhoni’s help first before calling for the physiotherapist Patrick Farhart on the field in the 9th over.

Dhoni attended to him first before Farhart checked out the issue with Shaw’s eyes. The umpires called for a strategic time-out due to the break in play.

Shaw went on to smash 64 runs off 43 balls with 9 fours and a six to help Delhi Capitals post 175 for 3 in their allotted 20 overs after Chennai Super Kings won the toss and put them into bat first.

DC got off to the super start with Shaw and Shikhar Dhawan adding 94 runs for the first wicket in 10.3 overs before the latter got out for 35.

But Shaw continued to attack the bowlers and got to his 50 off 35 balls. He added another 14 runs to his score before getting out to leg-spinner Piyush Chawla, who bagged both DC openers. (CSK vs DC Live Score, IPL 2020)

Shaw’s 5th IPL fifty took him second on the list of batsmen with most 50s before the age of 21. The list is headed by Rishabh Pant, who has 9 fifties in his IPL career so far.

The 20-year-old right-handed batsman is only in his third season in the IPL. Shaw has amassed 667 runs from 27 matches at an average of 24.70 with 5 fifties to his name.

Delhi Capitals won their last match in a Super Over against Kings XI Punjab while Chennai Super Kings lost their previous tie against Rajasthan Royals.